Depending upon the ever-changing demands of the users, import PST to Office 365 is the most common task carried out by the users. And, completing the entire process without any error or failure happens in rare cases. There are the number of silly mistakes that users do during the import process. This will later result in Office 365 import PST failed error, which makes users search for some troubleshooting ways for the same.

Now, to understand the problems or errors faced during PST import process, consider some of the queries asked by the users:

A few hours ago, we were importing PST files to Office 365 with the help of AzCopy Tool. And, suddenly, it display the status that Office 365 import failed. The details it displayed is that the process is 70% complete. Now, I am looking for a solution that let me resume the job from where it was left off or I have to restart the job? Some of the sites over the internet suggested me to the delete the entire online archive process and start importing all over again. I do not know why this Office 365 PST import failed as previously I have imported many times without any failure.

When I was uploading multiple PST files in batches, the upload works perfectly during upload process for the first 3 batches. But as I initiated a new job and created a new sas-url to replace the URLs in the copy job, it displayed 403 error message: 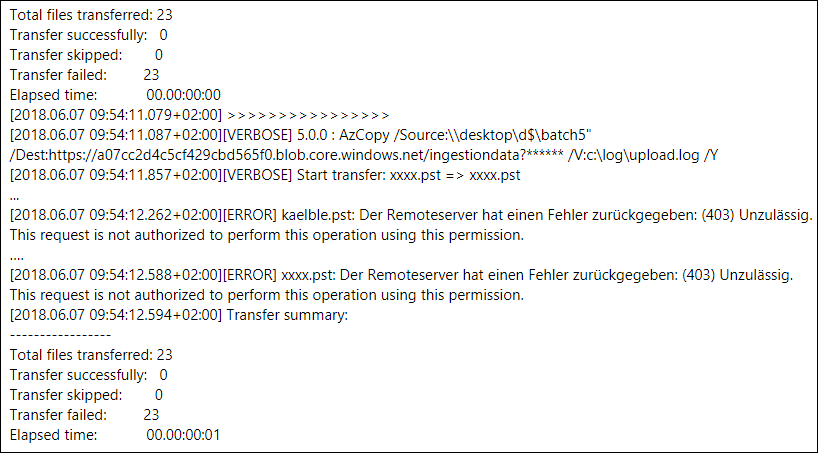 I am confused now and do not know how to proceed further. Can anyone suggest me some other simple way to import multiple PST files to Office 365?”

I was trying to import 5 PST files to Outlook 365 via a web-based import application. I have recently uploaded the files with the help of Microsoft Azure Storage tools. After that, created a ‘PSTImportMappingFile.csv’ file that helps Office 365 in determining which PST belongs to which mailbox. However, most of the mailboxes work fine but some of them return the following error:

So, I created a new job but the things are still the same. Does anyone know what is exactly happening?”
How to Troubleshoot Office 365 Import Failed Error?

This section of the blog will let users know the most common scenarios with a short explanation and some hints for troubleshooting:

This section of the blog will let users know the most common scenarios with a short explanation and some hints for troubleshooting:

Solution: In the CSV mapping file for the target mailboxes, a user should use the unique identifiers like ExchangeGUIDs rather than using the primary SMTP address of the users.

Explanation: The main reason behind this import data to Office 365 error is the soft deletion of mailboxes or mail users. They will combat the targeted user’s active mailboxes when they resolve the primary SMTP address.

Problem #2: If a user has created a job with the deleted job name, it displays an error.

Solution: Always use unique names for the jobs to import PST file.

Explanation: The job names must be unique always, in order to avoid any such restriction in the future.

After that, you need to have a look at the following parameters:

Explanation: After looking at the figures given above, it is clear that some of the items are already there in the targeted mailbox at the time of import. Hence, in order to avoid duplicates, some items were left.

Problem #4: CSV mapping files are not validated during the import process.

Error Message: “The specified file could not be found. Please ensure that the path to the file is correct.”

Solution: A user simply to re-check the file path in the CSV mapping file.

Explanation: The possible reason behind this is the difference in the cases of file paths.

Problem #5: Office 365 Service is not available

Explanation: This problem mainly arises when the source and destination are not proper. Moreover, the proper and right way of using Azcopy Tool is with the help of below-mentioned command:
AzCopy.exe /Source: /Dest: /V:

All above-discussed tricks are the possible troubleshooting ways to over Office 365 import failed issue. However, if a user is unable to solve the issue by any of the above means, then it suggested switching to some third-party tool.

In order to choose the best software for the import process, a user can try Office 365 Import software recommended by:

Apart from this, it all depends on the choice of the user for which he or she wants to go. But, if they are confused and unable to make choice between the manual tricks and professional, it is recommended to go for the tool to remove the Office 365 Import Failed error. It is one of the efficient application that requires minimum effort and guarantees complete data migration also.

What should I do? Office 365 Import Failed via AzCopy & showing 403 Forbidden Error

My PST file Corrupted while Importing thought AzCopy. How to import the same PST file now without any problem?

First, use PST Repair tool to recover your corrupted PST file data and then use Office 365 Importer for the safe transfer of data.

I have multiple Outlook files & Office 365 is showing an error during Import. How to Import them simultaneously?

Office 365 is showing QuotaExceedExpection Error while importing PST file. How to solve this problem?

Office 365 has its limitation on the size of PST file you can Import. Use PST split tool and then Office 365 Import tool or any other method to Import large size PST files. View all of Aisha's posts.